- from choir boy to beat boy

I became seriously interested in pop/rock music around 1961-62. I listened regularly to Radio Luxembourg in the late hours of the evening in bed after my Mum had given me a small, cheap transistor radio, which was made in Hong Kong. I also listened to Saturday Club on the BBC when I wasn't playing football for the school. I remember watching The 6.5 Special and Oh Boy! on TV, also on Saturdays. Later it was Juke Box Jury with David Jacobs.

But it seems to me that I have been interested in popular music for as long as I can remember. It amazes me that I can remember so many songs from the mid-50s, sometimes with complete sets of lyrics! Things from when I was only 5, 6 or 7 years old. For example, Bill Hayley, The Platters, The Chordettes, Johnnie Ray, Frankie Vaughan, Freddie Bell & The Bell Boys, Fats Domino, Tennessee Ernie Ford, Little Richard, Buddy Holly etc. etc.

The first records And then Elvis arrived! The first Elvis record I remember clearly was "Hound Dog". My brother Nick bought it in 1956. I can still see my Dad's face when Nick played it on the record player in the front room. Dad thought at that time that it was the worst thing he had ever heard. Many years later, we all chuckled when Dad got up and danced to it at his 60th birthday party, after my son had bought an Elvis LP. Nick also bought Lonnie Donegan's "Rock Island Line" in 1956. It was a Decca 78 with a light blue label. I often played Nick's records when he wasn't at home, and one day, when I was lifting that record off the tall spindle in the middle of the deck, it simply snapped in half in my hands. I was really in trouble! I was sentenced to buy him a new one out of my savings and pocket money! But it was no longer available on a 78, so I bought it on a 45. That was the first time I bought a single; the first of many!

Nick started to take violin lessons when he began at secondary school. He is seven years older than me, and I gave him a lot to put up with. I used to annoy him some-times when he was trying to practise. I also used to annoy him when I started in the church choir. I was seven and he was head choirboy, and I didn't always behave myself in the wayNick thought that I should! But I always looked up to him and wished that I was older! Not long after I joined the choir, he left because his voice broke. Then he bought a guitar, and started to wear tight black jeans and luminous socks. That was when Lonnie Donnegan and skiffle music was all the rage. Nick played in a skiffle group and I really thought that was great.

Nick started to play jazz But all of a sudden, skiffle was out, Nick bought a banjo and started to play traditional jazz.. Suddenly, he lost all interest in pop and rock music. He grew a beard, smoked a pipe and wore coduroy trousers and a duffle coat. This was around 1958-59, when he was about 17. He was in a band called The Hiawatha Jazzmen and sometimes they rehearsed in our dining room, even though Dad thought that they made too much noise!

My parents also liked music In their own very separate ways, my parents were very interested in music. My Mum had had ballet lessons as a little girl, but I always remember her being very keen on popular music. She liked romantic ballads, but she also loved something with rhythm and a strong beat, and she always enjoyed a dance. My Dad was more serious about his music and preferred classical composers. He had a collection of records, which he had started before the Second World War. He was also a very progressive father in many ways and helped my Mum in the house, even though he had a demanding physical job and worked long hours. He would usually vacuum clean the house on Sunday mornings and then relax afterwards by listening to his records. He also like some "modern" music, but he insisted that it had to be "someone who could sing", like Bing Crosby, for example. Dad had a good voice and a soft spot for Bing, and he had been known to entertain the locals at the village pub before the war.

Jazz I found myself in a dilemma after Nick's unconditional conversion to jazz music and I had a bit of a guilty conscience because I still liked a lot of other things. But because of Nick's influence I started listening to jazz and liked a lot of what I heard, particularly the blues-based numbers with vocals, for example Ottilie Patterson and Bessie Smith.
Then came the "trad jazz" boom with Chris Barber, Kenny Ball, Acker Bilk etc., and I bought quite a few records. But according to Nick, most of what I bought and listened to was commercial rubbish, whereas the things he and his friends were into were "real jazz" and had their roots in New Orleans and Chicago. I still bought and listened to a lot of pop and rock music at the beginning of the 60s. I remember being on holiday in Wales alone with my parents, where my mother looked up a lot of relations she hadn't seen for many years. That must have been in 1962, when I was almost 13. Nick was by now 18, had a motorbike, and had gone off to Italy with his girlfriend. We stayed with my Mum's cousin somewhere near Cardigan, and his daughter, who was 16, blond and extremely attractive, invited me out with some of her friends. We went to a kind of youth club where her secret boyfriend played guitar in a rock group.
That evening really did something to me! I had already been to several jazz sessions, in spite of my age, but the atmosphere at the club that night in Wales was exciting in a different way.

Teenager Nick left home to work in Yorkshire shortly after I became a teenager. By that time I had already started to rebel against his musical influence. Towards the end of my first year at secondary school, I struck up a friendship with some lads in the fifth year. They thought that I was much older than I was, and we talked a lot about music.
During the summer holidays, one of them invited me over to his home in Peckham where we listened, among other things, to "The Buddy Holly Story". I expressed great interest in that album, and I was really surprised when he offered to lend it to me. I must have played it a hundred times in the following weeks! And when I returned it to him, one of the first things I did was to scrape enough money together to buy it! I bought the first Beatles' single "Love Me Do" in October 1962 with money from my 13th birthday, and I started to buy alternatives to Nick's Melody Maker, such as The Record Mirror, The New Musical Express and Disc.

At that time I was still a chorister at Southwark Cathedral, but I suddenly realized that I wanted out! So I started to simulate the throat noises that I had heard other boys making when their voices were about to break. It didn't take long before it was suggested that I left, and I must admit that I was delighted! I think I left officially in November 1962.

It seems amazing now, when I look back on it, but by the beginning of 1963 I had already decided that I wanted to sing with a beat group! I plucked up the courage to answer some advertisemnts in the musical press and sought advice from John Smith who lived in the flats in our road, because somebody told me that he sang with a group. He was really helpful; he lent me a microphone and the "Bobby Vee Meets The Crickets" LP, because he said there were some good numbers on it that I should learn, and he also gave me some other good advice.

And that was how I came to apply to the advertisment that The Vendettas had placed in The New Musical Express for a vocalist in February 1963. 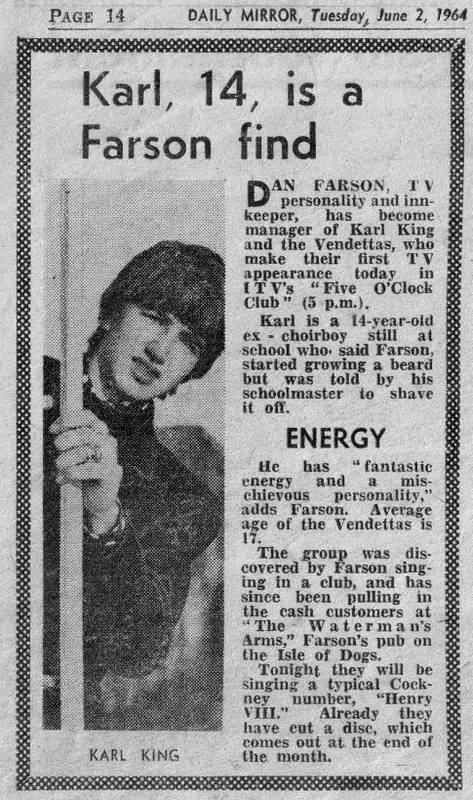 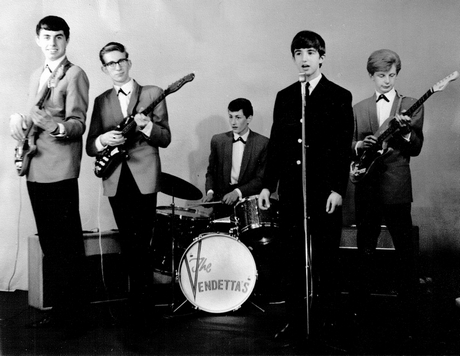